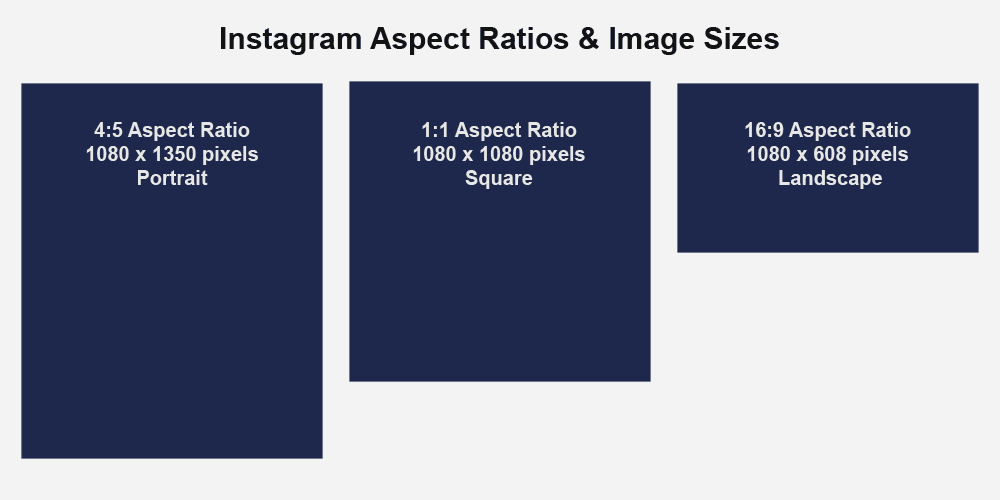 To take a step back and clarify matters, calculating the aspect ratio of an image is simple. Simply divide the width of the image by the height. It’s not any more complicated than that. For example:

So why does this matter? Well if you’re one of the vast majority of people that post on Instagram, it probably doesn’t. Take a picture, post it, and you’re done. Your image may get cropped by Instagram, but if you’re just posting a quick selfie you probably don’t care. That’s fine, I wouldn’t either.

If your photography is important to you though, you’ll want to post your work to Instagram and have it displayed without any distortion or inadvertent cropping. Call me a purist, but I want the pictures I post for public consumption to be displayed as intended, not the way some algorithm thinks it should.

All this information left me confused, so I thought the best place to go was the actual source, Instagram itself.  Instagram states the following:

Taking what Instagram claims they are doing at face value and believing they do what they say, then you should only post images between 320 pixels and 1080 pixels wide. Otherwise, Instagram will manipulate your image in some way in order to resize it for their needs. Most likely, posting an image wider than 1080 pixels and letting Instagram reduce it will have no visible effect on image quality. But I would also argue why take a chance and let Instagram manipulate your image when you don’t have to.

I’ve tried uploading the same image at resolutions of 1080 pixels wide and more, and on my phone at least, I didn’t see any discernable difference, for better or worse, with higher resolution images. For my money, there’s no reason to upload an image to Instagram that does not have a width of exactly 1080 pixels. Only the height of the image should be something other than 1080 pixels. That is where the aspect ratio comes into play, and this is where it all gets confusing.

According to Instagram, they will keep the picture’s original resolution as long as the aspect ratio is between 1.91:1 and 4:5. For images that are 1080 pixels wide, this translates to a height of anywhere between 566 and 1350 pixels.

In other words, as long as your image is 1080 pixels wide and between 566 and 1350 pixels tall, Instagram should post the image as is. At least in regards to the resolution and aspect ratio. Note that images 1080 pixels wide by 608 pixels tall meet that definition. They should be fine to post and not subject to manipulation. The only issue is that this image size is in a 16:9 format and not 1.91:1 as a number of websites state. A minor technicality sure, but annoying nonetheless.

Below are the correct image sizes to use when posting various formats on Instagram.

I always hated that for a long time Instagram would not allow users to post images from a desktop computer. As a photographer, all of my serious work was done on my desktop machine. I despised that I then had to transfer that work to my phone just so I could post it on Instagram. I was overjoyed when Instagram finally changed this arbitrary limitation and allowed images to be uploaded from my computer and eliminated a tedious and time consuming step.

For me, outside of a quick snap, I see no reason to ever upload an image to Instagram from my phone ever again. When I do post an image, I’ll make sure the image is 1080 pixels wide and between 566 pixels and 1305 pixels tall. I’ll also make sure that I choose to display the image in its original aspect ratio. That way I know the image posted will be exactly as I intended.